How Mental Illnesses Can Affect Substance Abuse In Teens

By adolescentadmin
Posted September 10, 2019
In Dual-Diagnosis
How Mental Illnesses Can Affect Substance Abuse In Teens2019-09-102020-09-16https://adolescentwellnessacademy.com/wp-content/uploads/2018/09/awa-final-logo-bigger.pngPrinciples Academy for Adolescent Wellnesshttps://adolescentwellnessacademy.com/wp-content/uploads/2019/09/shutterstock_75670843-e1568250261991.jpg200px200px
0

Statistics has it that during adolescence more so between the ages of 12 to 17, are mostly affected by the co-occurring disorder. This is a combination of mental illness and drug abuse and can quickly ruin someone if not attended to. According to experts, many children within the mentioned age bracket suffer from anxiety, depression, attention deficit, and eating disorder.

As usual, this is the same time that these children get to learn about drugs, and in most cases, they will want to use these drugs as a way out. It is, therefore, safe to say that children with poor mental health are most likely to develop co-occurring disorder.

What Makes Mental Illness So Deadly Mixed With Substance Abuse?

Many times you have heard on the news about children who do unbelievable crimes. Although most people don’t know it, co-occurring disorder can lead to such deeds. When a mentally ill teenager develops a dependency on drugs, they don’t solve their problem but rather make it worse.

However, the moment they are high on a drug, they tend to calm down and get the notion that everything is fine. When the drug runs out of their system, they begin to feel anxious and restless. During that moment, they become unstable because thoughts are racing through their minds leading some to do forbidden things.

Another thing that makes co-occurring disorder to be dangerous to teenagers is that it can reduce their life span. Drugs are never safe for our health, and when it reaches the addiction level, your internal organs are most likely to suffer. Mental illness, on the other hand, is a kind of torture that is invisible and can quickly drain someone out of life.

Why is it Easy For Children To Develop Co-occurring Disorder?

Teenagers are notorious and are hungry to explore how the world works. Peer pressure plays a significant role during this age, and substance misuse typically begins in the same period. Teenagers with the mental disorder find it impossible to face the world in a sober mind.

Most of these young addicts depend on the drugs to help them get through the day. They think that they need the substances to feel calm and in control while in the real sense, their condition is forcing them to abuse drugs. A teenager who needs drugs to fit in can have a mental illness that makes them uncomfortable when on their sober mind.

A teenager can suffer from co-occurring disorder for a long time without knowing it. That is because drugs and substance abuse are today rampant with the adolescence age. That makes it hard whether a child is using drugs for fun or they are trying to cover up for something. Because the rest of the guys are doing it, such a child feels safe abusing drugs. That’s mostly because he or she will not get stigmatized; instead, he or she will be accepted.

Most parents are always busy and don’t have enough time to check on their children. Research has it that children who are distant with their parents are more likely to develop mental illness. They lack parental care, which goes a long way to give your loved one a clear conscience. Being distant from your child also makes it easy for them to do drugs without you noticing.

However, several signs can help you notice that your child is not doing fine. Firstly, their general hygiene will d. Co-occurring disorder victims’ careless about how they look because they feel unloved and neglected. What will be in their minds is the drugs and painful thoughts that drain the energy and life out of them.

If your child begins to develop strange behaviors or changes their routine, then something must be up. Most teenagers that abuse drugs usually get the time to do it after school or by skipping school. Because they don’t want to get home looking as if they are on drugs, they will want to buy sometime before getting back.

Some children become anti-social when suffering from this condition because they don’t want anyone to find out. Such children will begin to lock themselves in their rooms most of the time because their mental state does not allow them to interact regularly with their family members.

What You Can Do: Mental Illness and Substance Abuse in Teens

If you have a teenage son or daughter, you must stay part of their lives and guide them through this challenging age. What makes the work of a parent even harder is the kind of peer pressure that can be a significant threat to their progress.

However, if you keep your child close, they will feel loved and relevant, and that alone goes a long way to build their confidence. A confident child does not need drugs for them to find life bearable around other kids in school. Contact us today and see how we can help! 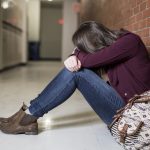 What Causes Depression In Teens?Dual-Diagnosis
CALL US 24/7