Effects Of Substance Abuse On Teens And The Dangers

When it comes to drugs and substance abuse, teenagers are the primary victims. That is because teenagers are curious and impatient to become adults. And because society is also showing them how adults do, they take a keen interest in becoming adults before their time.

Today, drug abuse among teenagers is a crisis all over the world, and it is a battle that we are losing as the world. It should not go without mentioning that drug abuse can lead to mental illness like depression, anxiety, and an eating disorder. Hyperactivity is another mental illness that can be as a result of substance abuse.

Mental illness and drug abuse results in disorder known as a co-occurring disorder. This is perhaps the worst state for your teenage child to be in. That is because their brains will become a slave to drugs, and they cannot face the world without at least taking some drugs. A co-occurring disorder is not something to joke around with because it can have the following effects on your child;

Experienced teachers can tell you when a kid starts using drugs; their academic performance drops rapidly. That is because they start losing interest in school and begin creating a prison in their minds. Most of the times, even when at school, they will want to cope, and they cannot do this unless they are high on drugs.

Automatically, their focus in school becomes weak, and with time, school becomes too boring that their rate of skipping increases in frequency until they finally drop out. One thing you should know about drug addicts is that they are rebellious and anything called rules become an enemy. In schools, rules are quite strict, and that makes it unbearable for addicts.

Drug addicts care less about their health and hygiene. All they want is to satisfy their urge for drugs, and some of them don’t even eat properly. Drug addict teens are no different, and because they are young, that kind of carelessness can be more harmful. Poor hygiene is not bearable, especially if the teen drinks so much alcohol that he passes out and ends up somewhere filthy.

You have come across alcohols which are always dirty and smell like a rat died somewhere. These are a couple of symptoms that you should look out for if you are raising a teenager. Some will try to hide it for a while, but as time goes and the addiction gets more serious, they will let everything go.

Lack of interest in anything

Teenagers are always up to something. They are energetic, and their minds are full of imaginations that keep them active all the time. Teenagers also have things that they like, for example, music, movies fashion trends, technology, and others. However, when they become addicts, all this glamour in their lives goes away. Nothing seems vital than their drugs, and so instead of buying the latest fashion or gadget in the market, they would instead use that money to buy drugs.

Without a connection to the world, depression can easily kick in to worsen the situation. If you realize that your child’s interest in something they are passionate about is dropping, you need to be cautious. Unless they are outgrowing what they loved because it is childish and is developing a thing for a new activity.

One apparent sign of drug addiction is anxiety. This is whereby a drug addict becomes restless, especially if the drugs run out of their body system, and they become sober. They will be seen to be unsettled and stress. Anxiety is a risky thing with teenagers because it knocks them off balance mentally and keeps spinning random ideas in their minds all because they need the drugs.

When anxiety kicks in, nothing can be accomplished because the focus of the victim is disoriented. In severe cases, a teenager can end up doing something unacceptable. For example, if he or she was at school and got into a fight as normal teenagers do, it can be easy for them to get extremely violent.

Drug addicts don’t want to be around people. That’s because they feel judged and don’t want anyone telling them that they are destroying their lives. Because they want to be alone, an addicted teenager will want to spend most of their time locked up in their room when at home or somewhere secluded when not in school.

Drug abuse and mental illness go together, and these should be the worst enemy for your teenage son or daughter. As a parent, supervising the behavior of your child is vital if you don’t want to lose them to co-occurring disorder. You also need to remember that peer pressure can quickly lead your son into this trap. 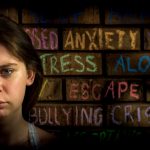 How To Get Your Teenager Help For AddictionSubstance Abuse